Homeowners in Amesville, OH called Mid-State Basement System because they had flooding in their basement that had damaged and waterlogged the paneling on the walls.

Once they had taken down the damaged paneling, they also noticed that the cement block walls were cracked and shifting. They were concerned that the top row of cement blocks, in particular, would eventually collapse inward. They also used the basement for storage and did not want their belongings to be damaged from recurrent flooding. One of our certified inspectors went out to the home to take a look and proposed using several methods and products to repair the complex issues in this basement.

The homeowners agreed to do the work and our skilled crew, lead by foreman Milton Castro, went out and installed a WaterGuard sub-floor drainage system, a SuperSump sump pump, Carbon Fiber strips, PowerBrace i-beams, and redirected to downspouts away from the home.

WaterGuard is a sub-floor drainage system developed by Basement Systems that is unlike any other french drain system. To install it, the crew dug a trench along the whole perimeter of the basement and placed the WaterGuard drains directly on the foundation footing. It has holes in the sides to collect water from the ground, on top of the floor, and from the walls. There is a specialized flange on the WaterGuard drain that is installed against the wall to catch any water that may drip down it.

These drains are installed at a slight angle so any water collected will drain into the sump pump and be pumped out of the home. This is where the SuperSump sump pump comes in. It is a non-clogging cast iron pump that s able to pump more than 2,000 gallons of water every hour. This was connected to the downspouts and drainage pipes that were lengthened redirected away from the home instead of along the foundation wall. This way, it will not seep back into the basement.

Then, the crew focused on the foundation repair aspect. There were two walls in particular that needed some repair. One had a severely shifted row of cement blocks at the top. For this, the crew installed PowerBrace beams. These are steel i-beams that are installed in the ground and bolted to the floor joists overhead. They will uphold the wall to prevent further inward movement and can be tightened over time to try to push the wall back to its original position.

Next, they used Carbon Fiber strips along the other wall. These are strips of carbon fiber which is an extremely durable material with high tensile strength. This means that it is virtually impossible to rip or tear it. The crew securely fastened these to the floor joists and floor along the other wall and glued them against it. This will ensure there is no more shifting and keep it from settling as much as the other wall had already.

The homeowners are happy with the repairs and no longer have to worry about the basement leaking or the integrity of the foundation. 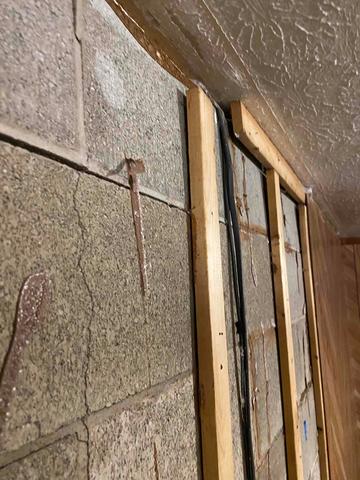 This is a close-up of the wall with the severely shifted blocks. The row had separated and was moving inward. 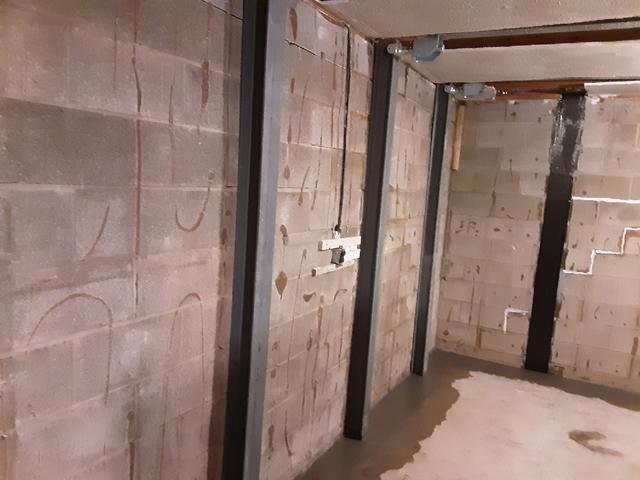 This is an after photo of the same wall with the PowerBrace beams, refilled cement from the WaterGuard installation, and Carb Fiber strips on the other wall. 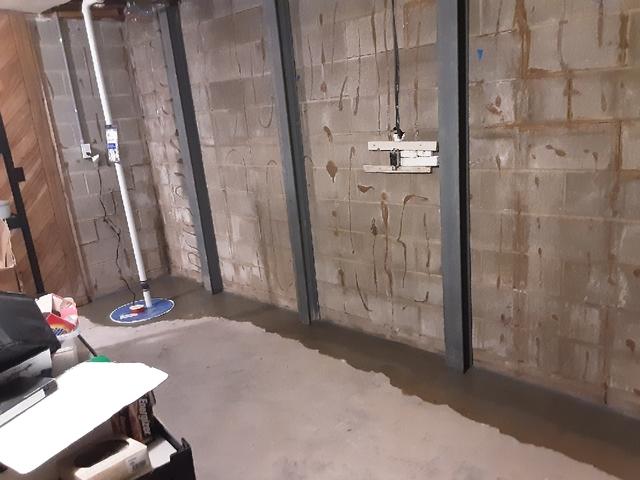 This is another view of the PowerBraces and also a picture of the new SuperSump in the corner. 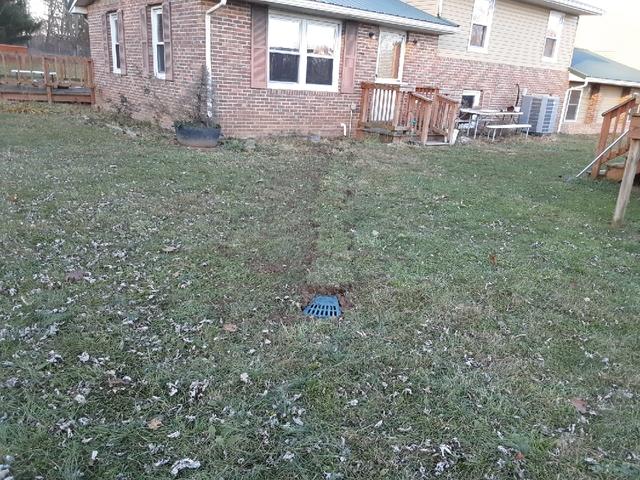 This is the outside of the home where the drainage pipes were lengthened and redirected far into the yard instead of along the foundation. A LawnScape was used to blend in and allow the drains to drain onto the yard.

Before & After Photos: Basement Waterproofing and Foundation Repair in Amesville, OH
Back to Previous Page
Back to Case Studies